This week has been rough.  Mentally I have always been one to give up.  I’ve never been forced to finish anything.  I thought after writing my first book that things had changed.  Then came After the Day and Red Tide.  Those were the moments I thought to myself that I had changed and that I knew how to finish something. 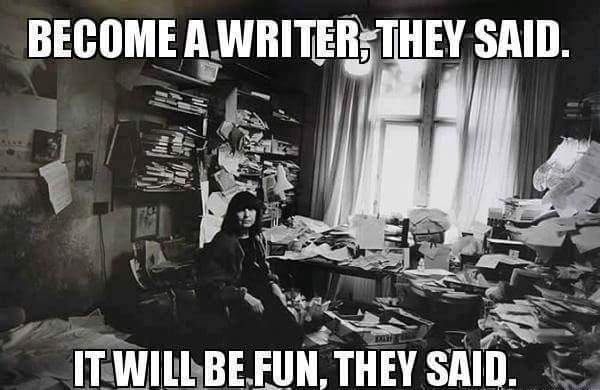 I quit my job recently and it was a long time coming.  Not because of the writing, as I try to tell people, but because the job was destroying my self worth.  I had been shown I can do better.  I thought that I didn’t need acceptance from some outside authority.  I was wrong.  Humans are social creatures and as social creatures we look for acceptance from each other.  People can be cruel though.  In the past I have been surrounded by cruel people, those that need to bring people down so they can feel better about themselves.  I have been guilty of this too.  Learned behavior is a shitty thing when it’s not positive behavior.

I thought being a writer would be the coolest job ever.  Having something I can point to and say that “I created that” is a great feeling.  It’s a lonely job.  I understand why the people I admire in this field have their assistants and people they constantly hang out with.  As somebody with low self esteem and always doubting myself, again learned behavior, it’s difficult to push yourself.  When you finally admit to yourself you have no idea what the fuck you are doing is a depressing and eye opening moment.  I have learned the ins and outs, studied the strategies, marketing, and the persistence it takes.  My time has been spent learning how to be a story teller and improving my craft.  At the end of the day I don’t know a damn thing.

I’ve been working on a few projects.  I put out my first non fiction book. I released the first book of a spin off series.  I’m constantly working of new martial and rewriting old material that hasn’t been released yet.  One of the most difficult things about doing this job is not knowing how good your story is until later.  Once a writer finishes a story and looks back on it, it’s easy to say to yourself that it’s the greatest story ever.  It’s crushing when somebody comes out from nowhere and shits all over your work of six months to a year.  I can sit here and tell myself that the job of the critic is to feel better about themselves for not doing exactly what you are doing.  It’s a nice idea but at the end of the day the review and your work are both out their as a pair for people to read.  Unfortunately people are more likely to read the short review before they will read your book.  While you wrote a book the critic spent a few minutes on their phone bitching about how they never did anything but write a review.  That’s how I try to view it anyway.  Sadly reviews, even bad reviews, end up getting credit from potential buyers when the critic admits he never finished reading the book.

Maybe I should stay away from the reviews all together.  It could be the smartest route to take.  I became addicted to what people had to say when After the Day was accepted by readers as a good realistic story.  It had it’s bad reviews but over all the majority of people liked it.  That’s not to say that I wasn’t affected by the bad reviews.   I had the usual “well, fuck you too,” moments and went about my day pissed until something changed.  It’s difficult to let something like that slide.  Have you ever seen a parent that is told their child is a screw up?  That’s what it is like being a writer except our children are being insulted all the time.

It’s difficult to learn to be positive in a shitty world.  I see the people on the internet talking about our wonderful world and how to reclaim your happiness.  The things I find enjoyment and peace from are disappearing.  I go to the lake and find beer cans floating on the shore.  Trash is left in the state land when I’m out hunting.  There have been several days when I go out into my garden and find empty gin bottles tossed over the fence.  It’s rough trying to be positive when the majority of people around you shit all over everything.

I’m not giving up. I can’t give up. I have no idea what the hell I would do with myself if I did.  I am quickly learning why Hemingway beat the shit out of people that wrote bad and insulting reviews of his books.  It makes sense.  Human beings can be horrible creatures.  It’s why I left my job. It’s why I’m alone. It’s why I write.  How else does somebody escape from this world?