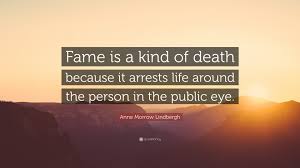 The true test of an artist is finding fame after they are dead. Over the years this has become a reoccurring theme. When a singer dies CD/ download sales skyrocket to number they never saw during there life.
The first time I saw this was when Curt Cobain died in the early 90s and Nirvana became a household name. Stieg Larsson the author of Girl with the Dragon Tattoo, never saw the fame or money that came with the publication of his trilogy. He died from a heart attack after the elevator broke down in his apartment building and he had to take the stairs. There is a theme here, where the public doesn’t notice somebody until there is the news of a tragic death. Regardless of age we hear the same “they were so young” and “they could have done so much more great stuff” and yet these people never bothered to find their work while they were still alive.
Americans had a weird fascination with death. There is a long line of famous people that never made it to their 28th birthday. We appear to thrive on these stories of the fallen hero even when their death is the result of their own hand. Suicide has become a common method to end one’s own life if they have reached a certain level of fame. Recently Brody Stevens passed away and I have to admit I had never heard of the guy before. Other people I know pointed out movies he had been in and yet I seriously had no memory of him. In the past I would have gone on YouTube or google and learned as much as I could about this man. This time I can’t. I personally know too many who have committed suicide over the years. I had a hard time with Anthony Bourdain’s death last year, something that hit me harder than I would have expected.
I don’t know when this measurement of fame first started to appear, when a person was celebrated more after their death then they were during their life. We gaze upon the flaunting aspect of what could have been while we didn’t appreciate what had already been accomplished. People look back on JFK as if he was one of the greatest presidents in our history, but when you look back, he didn’t do much during his two years in office and the one thing he is remembered for is taking a bullet to the head on television.
Solidifying one’s legacy in death has become the new normal. A large number of people that shouldn’t have been forgotten from our memory are disappearing over the years. Kurt Vonnegut and Gore Vidal, both men lived their lives to their last days and died of natural causes and yet most people will never read their books as time passes. Hunter S. Thompson and Hemingway both ended their lives with a gun and people seek out their books in droves. I can’t explain the phenomenon, this strange criteria for immortality through suicide or death by misadventure, but the numbers are there. The one thing I wish we would change in our society is celebrating people for what they have done as opposed to thinking about what could have been. Isn’t that the romance that comes from these deaths, thinking about the pieces they would have created had they not died?