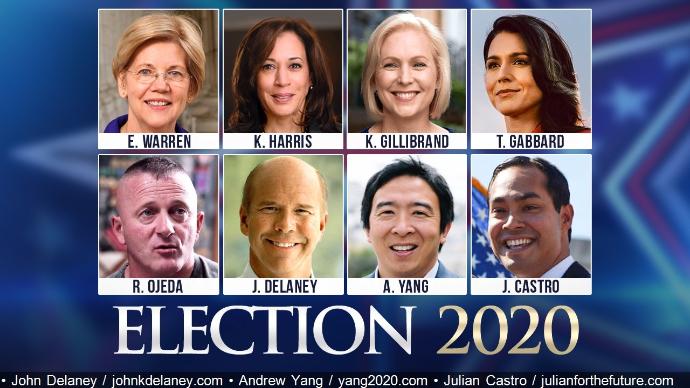 2020 is coming, too soon if you ask me. It’s not the year itself I have a problem with, it’s the barrage of political B.S. we will have to put up with by people running for office. Before I stopped watching/ listening to the news I noticed there were almost twenty people fighting to be the person to run against Trump. Out of everyone there was only one that I could see having a chance and he is not the guy that the media is pushing. This post isn’t about Andrew Yang, instead it’s about our weird marriage between news media and politics.
The Berning question you might have, see what I did there, is why not support Bernie? He was the guy that would have beat Trump back in 2016, the guy that should have received the nomination over Hillary Clinton but was bent over and plowed by his own party. Why can’t I back Bernie? He didn’t have the balls to stand up to his own party. His loyalty is in the wrong place and while loyalty can be a great trait to possess, to continue to engage in a relationship with a group that stabs you in the back, bends you over, and humiliates you in front of the world, if you are unable to learn what the true nature of a group is after experiencing such a betrayal then how the hell are you going to stand up against another party or another country? Bernie was my guy but he bitched out in the end.
When I heard Kamala Harris was running I rolled my eyes and shook my head. A professional liar, I mean lawyer, was the last thing we needed. She has changed her position on policies more than the number of people she sexually harassed while working as prosecuting attorney in the state of California. You don’t pay out 3 million in settlements when you are innocent.
Cory Booker is running and the only thing I know about him is that he is having sex with Rosario Dawson. Dude, I think you have better things to do than run for president. Enjoy your life.
Elizabeth Warren is an embaressment to herself. She took a DNA test to prove that she is part Native American and fail that test. When Trump became president she was formidable with his appointments to his cabinet but in the end she approved unqualified people and played along with his perverted agenda. Another betrayal.
Surfer babe, Tulsi Gabbard has not impressed anyone with a poorly stated message and coming off as “too chill” in my book. Tulsi is the stereotypical hot babe who is easy to look at but hard to listen to. A veteran of the middle east wars I have respect for her when it comes to serving the country but I have to say maybe it should stop there.
The rest of the group is a bunch of white men and women who already have weird scandals that I’m m starting to believe were fabricated to bring attention to their dying campaigns. The whole thing is a joke.
I found my guy early on and people love pointing out that it is the longest of long shots and I am fine with that. When I point out that Obama came out of nowhere, I receive weird rebuttals that border on racist without crossing the line. From one white person to another, I know what you’re really saying.
This time around I’m going to follow my guy, Andrew Yang and enjoy the ride as long as it last. If he gets a shot at the white house I’ll tune in and see what happens. When he is out of the race, so am I. I want something different, I want to have something real in this country. While we still have ancient turtles like Bitch McConnell keeping the country in a constant spiral down a toilet poop chute I have little hope of any change in this country. We need a plague and it can have the initial outbreak in the capital building. Nature may abhor a vacuum but an artist cannot create a masterpiece without a blank canvas.
I want to be excited. I want to wake up and hear what new breakthrough has happened. What has changed for the better. Instead, what we get is a flaccid, stagnant, impotent government that is too lazy to do anything but jerk each other off. The weather outside today is how the last couple of years have been, a dark dreary cool wet day with a lack of sunlight to have things grow and too cold to enjoy and one has no ambition to venture outside because of the dogshit on the lawn. We are all stuck in a bubble of our own making and until we build up the courage to go outside and face the fake boogiemen of our days that we will never end up having a better place to live.