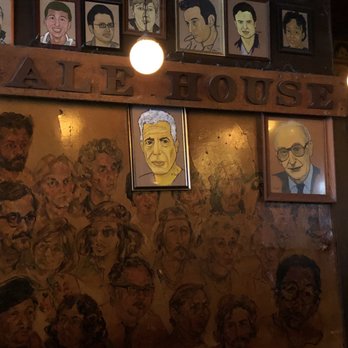 It wasn’t difficult to find. The ale house is across the street from Second City and while it is small it stands out with its unique appearance and classic exterior towered by modern yuppie crap. I first heard of the Old Town Ale House on Parts Unknown, the popular show hosted by the late Anthony Bourdain. It was in the last full season of the show that Bourdain visited the Ale house, surrounded by the artwork and eclectic décor. The furniture is a simple and well-worn design. The wood had been rubbed down to the imprint of thousands of people in these seats over the years, the wooden bar has a feeling of love with the scratches and dents smooth over the years.
The one bar I have been to that reminded me of the Ale house was the Dune Saloon in Grande Marais Michigan, the favorite beer house of author Jim Harrison. That find was a pure accident that filled me with delight and while the Ale house was fully intended it didn’t fail to reveal a few surprises in the hour I was there. The portrait of Putin wearing a ballerina tutu with his shirt off was a delight to see since it wasn’t finished in the Bourdain episode. Behind the bar I spotted a stack of books by the artist of the bar, Bruce Elliott. I remembered hearing about his blog telling the stories of his youth and tales of the Ale house and now they are available in print. I bought a copy for $20 and the bartender told me that if I stuck around for 20 minutes Bruce would stop in. I paid for an hour at the parking meter with the expectation of being gone before that time. Like clockwork Bruce stopped in and saw me reading his book at the bar. I asked him to sign it and we started talking for maybe five minutes. It was an awkward conversation one that had me watching the time with less than twenty minutes left on the meter. I didn’t have the time to relax and enjoy myself. With a two hour drive back there was little to be enjoyed at the bar and I still had to work the next day and watch my daughter. The lady Bruce was with was from Grand Rapids and we chatted about that with little to say. It sounded like she had not been back for a while stating that it was a bigger art community than when she left and money had not ruined it. I couldn’t ruin it for her. Let her think what she wants about her home town.
I snapped a picture with the Bourdain portrait and a few others to remember the place. Who knows when I will be back, if ever? When I used the restroom before heading out, I noticed that the toilet stall didn’t have a door on it, the urinal was a foot away from the sink and the mirror was scratched to shit. I was told that I would be able to feel Bourdain in there. For a moment I thought he was trying to tell me something. That buy the ticket, take the ride mentality was staring me in the face and I left the ticket on the counter. Not today. I like my life. I have responsibilities and while I could have traveled down the rabbit hole, I decided to leave it be and let someone else have the story. It was hard to see the place, recognize the seat Bourdain sat in. meet the people who talked to him. Take in the place that so many people have walked through hoping to leave with a little something extra.
Walking out I found a tobacco shop around the corner. If I wasn’t going to meet up with Jake, I could at least go home with something I wouldn’t find anywhere else. The time was ticking and I only had a few minutes until Chicago does whatever it does to cars after the meter runs out. I looked at the pipe tobacco in the case found one called Secret Agent and couldn’t find anyone to help me. I wasn’t greeted walking in. everyone was smoking cigars and the shop was one giant humidor. People would look at me wondering who I was and yet I wasn’t served or asked if I needed help. In the end I turned around and walked out with one guy making some shitty comment I didn’t catch. Who cares? If they don’t want business, fuck em.
I got in my car, hit the highway. Almost crashed taking an exit too fast to buy gas. Stopped at a McDonald’s that no longer had humans working behind the counter and made it home by 1am. For a few minutes I sat in bed wondering if I had fallen asleep at the wheel. Was I dreaming about being home going to bed? Once I convinced myself it was real, I went to sleep and sleep well I did. The adventure was over and it was time to return to my normal life.