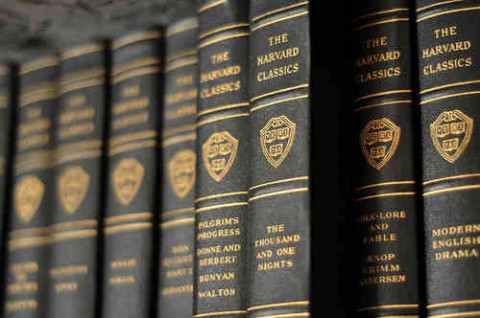 A few months ago, I bought an incomplete set of the Harvard Classics. This set of books includes 51 volumes and also has a second version The Harvard Classics of Fiction with an additional 20 volumes in that set. I was attracted to the set from the beginning knowing that most people who attend Harvard never touch any of these books. It is rare if anyone reads these days and even more rare if they pick up something regarded as a classic. The set was one volume away from being complete and I knew a place that was likely to have the missing link.
Lowry’s book store is outside of town in Three Rivers Michigan. Across the street is a brewery I like to visit once a month for their delicious beer and burger of the month. On a visit yesterday I rummaged through the shelves and continued to see complete sets of the five-foot stack, a nickname for the series, and eventually came to a place where random versions of sets were piled together and sold in individual volumes. Sitting in a pile, at the bottom of course, was volume 20, Dante’s Inferno. I am already familiar with this text, growing up catholic and hearing the story every year, Dante’s Inferno is nothing new to me but the set was complete. I could move ahead with reading the set and not worry about missing anything as it was intended on being read.
The set that I bought was the original 1909 publication of Dr Eliot’s five-foot shelf. Dr Eliot was the president of the University at the time and was challenged to put together the stack of books when he made claims that a liberal education could be attained by reading 15 minutes a day from certain books. Of course, the books had to be selected and a year later Eliot released his list and P. F. Collier and Son published the books selling 350,000 sets. Later the shelf of fiction would be added.
There is one other blog that has tackled the Harvard classics, Beer and Trembling completed 52 weeks of reading the classics in one year while also doing beer reviews at the same time. I don’t know how long this will take. I’m not sure I can keep up with the schedule of one week per book. Considering that some of them are longer like Wealth of Nations or The Voyage of the Beagle there will be larger gaps between entrees. Still, there are a few books that I have already read and while I will start this project with those books reading the rest of the series is a task that will take a good portion of my time.
Why even bother with it? What is the point? There is a long list of writers that I admire and while I can go on and on about how their books have influenced everything from my life to writing style I have to admit that they all have one thing in common. They all grew up reading or studying the classics at one time or another. Sure, they read each other’s works but for a certain time period the only thing they had available were the classics that came before. When this list was created Hemingway wasn’t known, Fitzgerald wouldn’t be published for another ten years, Hunter S. Thompson read the previous writers but he also grew up reading the classics.
I don’t know how much this will change anything, if reading the classics will make me into a better person or change my views on life, but it is worth a shot and you don’t learn anything by not trying something new.

One thought on “Returning to the Harvard Classics”