Saturday started out like any other except my wife was already out of the house when Zoey started to stir at 9am. The morning was slow and none of the places I wanted to go to were open until noon. I ate a small breakfast of leftover pizza and drove downtown to withdraw some money and pick up Ragtime by Doctorow.
Zoey and I went to the library bookstore where I paid for the first print hard cover edition of Ragtime. The price was $1. Zoey did her usual rounds and created a ruckus as I carried her out the doors and hour later. She had become obsessed with a sesame street counting game and didn’t want to leave Big Bird behind.
The first stop on my list of places to eat was Pho on the Block, a Vietnamese place with really great Bao and Bahn Mi sandwiches. My wife had been there the day before and said the food wasn’t as good as she remembered. I decided to check it out for myself and see. The décor was the same with an old moped hanging on the wall and community style tables in the middle of the serving area. The menu was almost exactly how I remembered it. Instead of beef Bao it was labeled as sirloin.
I ordered one of each of the four Bao they had available and waited. The man at the counter was middle eastern and there was a communication barrier we were finally able to break while I was ordering. A man sat at the counter window seats and had been there since I walked in. heavy set and long dark hair, he reminded me of a young Jonathan Gold on a quest for some good Pho. Zoey sat beside me as we drank water, she sipped from the glass and bit the rim still learning how to use a cup. After ten minutes an order came out from the kitchen where a middle eastern woman was preparing the food by herself.
I remember when Pho on the Block first opened, the staff was black and white, male and female. There were three to four people in the kitchen and a manager that lingered in the corner on her laptop. The wait time were short and the food impeccable.
I wasn’t sure what my wife had ordered the day before and ten minutes later, when my wait was finally over, the Bao appeared and I noticed how much things had changed. The tofu, the best item on the Bao menu, didn’t appear to have any roasted coconut on it. The sirloin was piled so high you could barely see the white bun. The lemongrass chicken was blackened and barely visible under the mountain of carrots thrown on top. The pork belly was the only time that resembled what I had eaten before. Everything was covered in insane amounts of sauce. 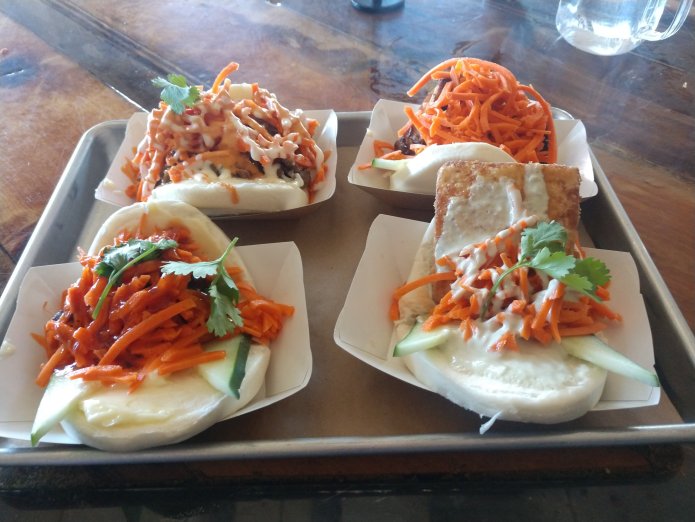 While trying to pick up the sirloin bao everything fell out and the few bites I was able to eat ended up being some of the best from the that meal, spicy, sweet, and fatty the combination hit the spot. The chicken was dry and lacked any flavor of lemongrass. The pork belly hadn’t changed much I’m happy to say, but the tofu, why on god’s green earth anyone would change the recipe on that I will never understand. The fried cake was spongy and lacked any type of flavor other than the oil it was cooked in. the coconut that was on the namesake was missing and therefore the point of ordering such a meal. What I had saved for last as the grand finale was a huge disappointment. I want my bao back.
Zoey enjoyed some of the sirloin and pork belly, but like me she was not a fan of the tofu. Afterwards I considered going to Nonla burger to pick up a Rubin burger they advertised on their Instagram account but I was too full and decided to head to Tiffany’s instead. The idea was to pick up some desert for later and enjoy it at home. I had known Tiffany’s for their baclava and other middle eastern treats. When I walked inside, I found a large cooler filled with cheese and aged meats. At the deli there were containers of salads of all types and flavors. Baclava was not to be seen. Zoey went crazy at the low-lying cooler filled with cheese. She wanted to pick up and throw everything regardless of style. I was able to find a few cheeses to try later but when the screaming started it was time to go. I quickly paid for the cheese and went out the door.
The adventure was over, or so I thought. Later that evening my wife was hungry and I wanted something besides the bad tofu in my belly. Sarah had an idea and what she had suggested I didn’t expect.
“I really want some Zooroona,” She said referring to a middle eastern restaurant next door to Tiffany’s. We had not been there in maybe two years.
Nothing had changed inside; the furniture and décor were the same and the smells from the kitchen told you this was the right place to be. We were taken to a booth and looked over the menu. I wanted something that I had never ordered before. I spotted the kebabs and knew at some point I had eaten those in the past. Vegetarian dishes would not have held me over so I skipped them. I spotted the marinated lamb in hummus and ordered the dish.
The lentil soup that was brought out first left me wanting more with the citric aroma, bitter flavor and sweet undertones balancing out the dish.
Zoey snacked on hummus and a few minutes later our meals arrived. Sarah picked one of the vegetarian meals, a mix of rice and curry with a garlic sauce on the side. Our meals went down fast and Zoey swatted away any offers from our plates more interested in her Sesame Street books than the food in front of her. The lamb was in bite size chunks and didn’t have the pieces of bone that I had found at other places. The Hummus was creamy and for superior to anything one might pick up at the local supermarket.
I had been hunting something new, something to expand my pallet outside of the street tacos and processed food that keeps the world moving. The meals of mystery meat and bleached white flour settle on the belly and leave your system forgetting that there is food out in the world to enjoy and not just subsist on. If we could have this kind of food everyday the world might be a better place. 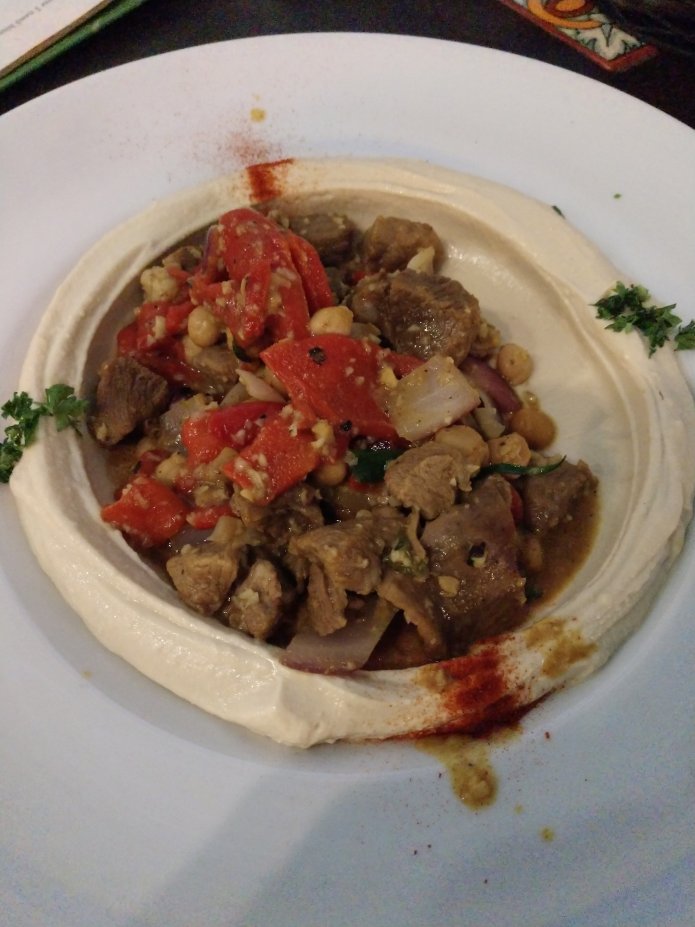 I finished the meal with a 2 oz glass of Ouzo and let the liquorice flavor settle into my stomach. I had seen this drink on several traveling shows but it is hard to find on menus saturated with too many wines and the same beers that everyone else offers. I didn’t expect to see an old fashion on the menu and gravitated towards something that I knew I would not experience elsewhere. Ouzo was my desert.
We left Zooroona and for the next day I didn’t feel the need to eat. My cravings had been satisfied and for the first time in months I didn’t feel the need to snack later. This might be the difference between real food and the garbage we feed ourselves day after day.

One thought on “Ragtime and Stinky Tofu”