The day appeared to be a bust. For some reason I thought that Dick’s Pour House was in Traverse City but I was horribly wrong. Our mission was to hit the peninsula with all of the wineries visible from Traverse City. For years I had heard stories from people about going to Traverse City and how the wine was “soooo amazing.” I had gone on the south west Michigan wine trail several times and found most of the wines to be far superior than anything I had tried from up north. Harrison on the other hand had a different opinion. “I have yet to find a domestic red wine worth drinking.” His taste stayed with the French reds and I had to admit a fondness for Italian reds and the occasional Cotes du Rhone. I found no harm in exploring a region that has been working on creating tasty wine and thought maybe Jim was selling himself with not exploring what was available in the region.
The day started out with breakfast at the Flap Jack Shack, a retro establishment that looked like it was straight out of a 1970’s film with wooden beams holding up a cathedral ceiling, orange seated stools around a bar with a marble top and glass tiled side. The only thing missing would have been shag carpeting but that was likely removed years before due to health code violations.
I chose a sausage gravy omelet while my wife ordered a skillet meal. Zoey had a banana sushi dish coming her way. The place was packed when we walked in. the day was 9-11 and the television wouldn’t let me forget what the day was. For days now I had gone without a television and the one day I try to forget for my own sanity I have to see images of the trade center towers and the pentagon building on fire. Meanwhile the current president is on record stating that trump tower is now the tallest building in New York city on the day that it happened.
After filling my belly and watching zoey cover her face with peanut butter and whip cream we drove through town and went up the county road into the peninsula in search of some good wines. Our first stop was an old school house, Peninsula Cellars reminded me of a few places back home, specifically Texas Corners brewery that also used an old school house for their place of business. The tasting was cheap, $5 for five wines and everything on the menu we tried was to our liking. Not wanting to spend all of our money at one place we bought one bottle and went about our travels. I will say I am looking forward to having Detention again at some point and the Foreign Exchange Student was a delight on my tongue. Take that as you will.
Next on our travels was Bonobo Winery, a scenic place that over looked the wine fields and had a deck that people could enjoy with a glass or five. From the start there were a few things that were odd. It was $12 to try five wines and there were only five wines to choose from. The wines were nothing to brag about and their prices said more about the owners than their quality. As we went through our tasting more people came in and they appeared to be models straight out of a mall shopping catalogue. All the women in this place were blonde and tried to fit some kind of breasts, waist, bust ratio that I was not too impressed with. Hair was blonde and cut to a specific length that wasn’t too long or too short. Blue eyes were either fake or real. Tans were fake, sprayed on by some latin American pool boy.
A storm rolled in and while we were waiting for our last couple of glasses two guys that could have been fill in for the movie Sideways walked in. the mouthy good looking guy kept making comments and asking to do things that were not only never done but also illegal under the law. No, you can’t grab your flight of wines and sit on the deck watching the storm roll in. none of the wines appealed to us and in the end we raced out of the tasting room to the car in down pouring rain to find an antique shop next door to de-douche from the experience.
The antique shop was amazing. A three story barn with tons of things to look over and Zoey found an old metal doll house to test her tetenous shot against. Downstairs I found a copy of Hemingway’s By-Line: a collection of correspondence and articles written by the man over four decades. This was put together after his death but considering how hard it is to find his non-fiction I had to dish out the $16 for this hard cover edition with the dust cover. 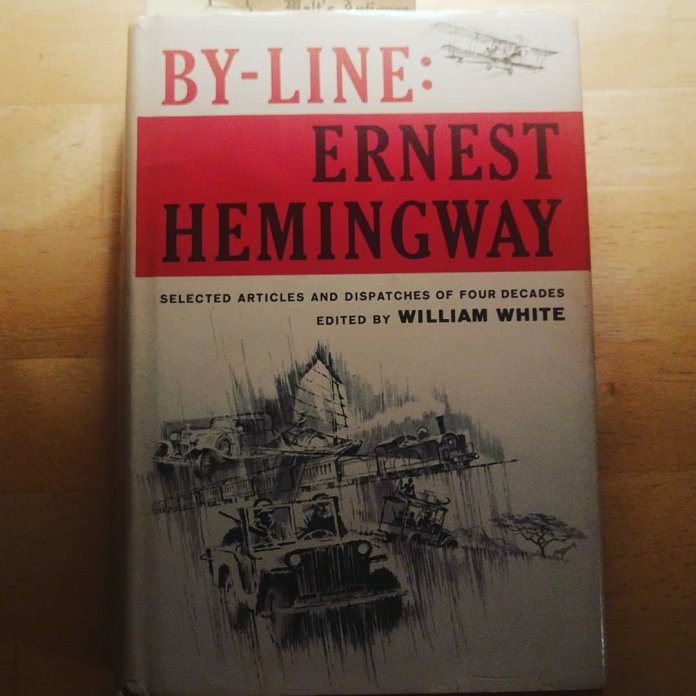 Next in line was Bower Wines, the second oldest winery on the peninsula and featuring dogs on many of their bottles. The place was busy and to do a tasting there was to spend an hour waiting for a spot to open at the bar and to wait for the drinks to eventually be poured. I ended up enjoying a 2018 wood free Chardonnay and bought a bottle to take home. I learned a little history of the wine industry for the area but nothing spectacular. Before the 1990s the wine trade did not exist here, so maybe in Jim’s defense they did not know what they were doing at first and his opinion was correct for the time.
The rain cleared and we were on our way. 2 Lads were waiting for us and the place did not disappoint. The view over the lake was spectacular and at first the tasting was a bit of a disappointment. $12 a piece to try five wines and there were a few snacks to enjoy with it. Who ever had the idea of adding a spicy dip to the snacks is a fucking idiot and should be taken out back and beaten. Regardless, the wine ended up being good and I had the pleasure of trying a Cab Franc that was so tasty I paid the $35 for a bottle that I never could justify otherwise.
On our way out of the peninsula we stopped at Brys wines and by this point we didn’t want to do a tasting, burned out on bad wine and over priced samples that said “our stuff is so good you should be pleased that you tried it.” I found the more a place charges the less confidence they have in their product and for good reason. Brys was also $12 for a tasting of five wines and at this point we decided to just buy a glass and sit on the deck. I was a nice view but the point to was to figure out where to go from here.
We had not thought that for ahead and decided to hit Dick’s Pour House regardless of the drive. Dick’s was on Leland Lake and we had 30 minutes of driving to kill. We pulled up to Dick’s and found a small one story diner that had been remodeled several times over the years. There is a famous photo of Jim playing pool in this place and these days there is no pool table to be found. The two lights with green domes still hang from the ceiling but a table top bar now sits under it for people to congregate. Hear heads hang on the wall. The bar has an art deco design from the 1920s or 30s. next to the bathroom entrance hangs the picture of Jim playing pool. 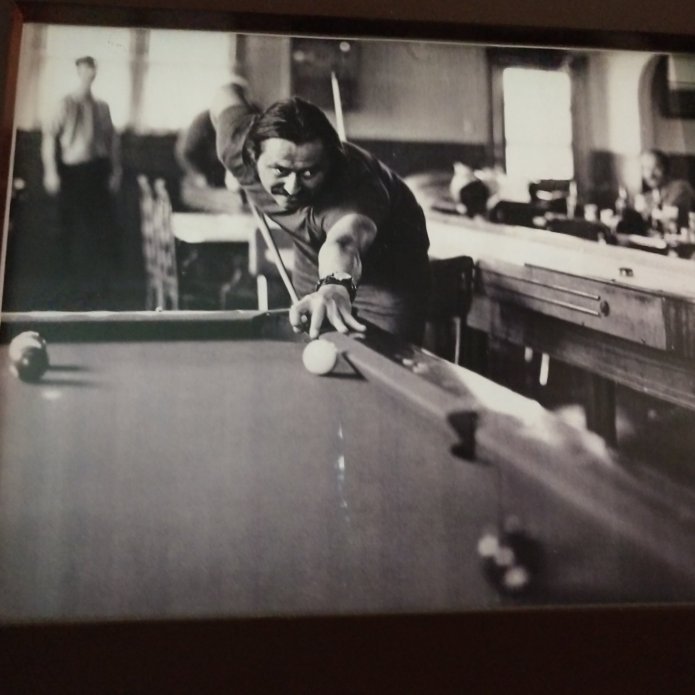 Its easy to see where the table once was and who knows why they decided to get rid of it. I ordered a blue cheese and bacon burger with Horny Monk beer from petosky while my wife ordered a salad. I would learn later that Dick’s was on its third generation of owner and that the people running it still knew who Jim was. Instead of talking to anyone we ate our meal, paid the tab, and left. Dick’s had a similar flare as the Dune Saloon with the taxidermy and old wooden bar, it was easy to see that this was the kind of place Jim would go to. In the corner of the place was the old wooden booth that the payphone would have been in.
We left Leland and went home. The day had been long and involved, and in the end, even Zoey was eager to be done with the day. You know you have done too much when a two year old feels like it had its butt kicked.

One thought on “Searching for Jim: part 4”