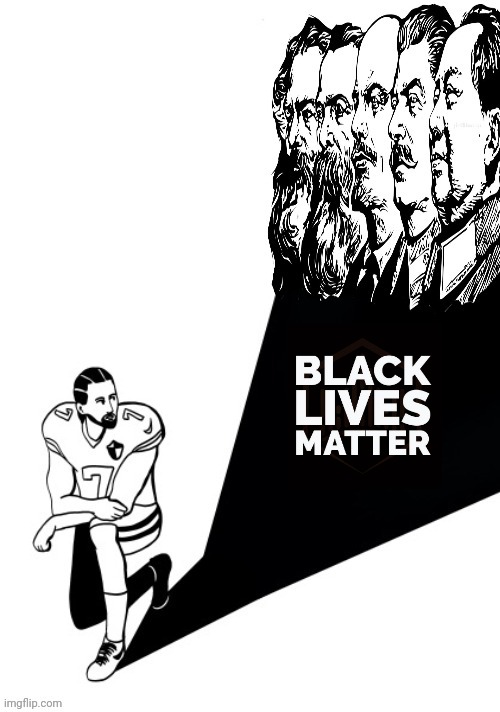 A week before the above statement was made, I had already noticed a comparison between what was happening around the country and the Cultural Revolution of China from 1965-1975. The initial demands from BLM had already been answered with the police officers involved in the death of George Floyd arrested and charged with murder. However, the protest didn’t stop. Not only did they not stop they escalated into riots, looting, and occupation zones. Businesses were burned down and statues torn down from their pedestals. These protests were no longer about the death of George Floyd, this was something entirely different.

I had read the Communist Manifesto years ago and in the past week several things were said or done that made me go back and read it again. What struck me while reading this short book is that if one was to replace “Bourgeois” with “white” you have BLM entire platform in this one book. Everything from the destruction of the Nuclear family to the elimination of property ownership is in there. For example, in section two is the following passage: “The abolition of Bourgeois individuality, Bourgeois independence, and Bourgeois freedom is undoubtedly aimed at.”

Now let’s try that again. The abolition of white individuality, white independence and white freedom is undoubtedly aimed at. Sounds pretty familiar, right? The examples go on and on.

These policies are playing out before our eyes with the destruction of statues that are not related to slavery, black oppression, or racism at all. In many cases these statues are a reflection of the opposite. This has nothing to do with the death of George Floyd. This is also linked to Marx. “Those who control the past control the future. Those you control the present control the past.” There is a rewriting of history taking place and it is an attempt to steer the country in the direction they want to go in. there is no negotiation with this.

“If this country doesn’t give us what we want, then we will burn down this system and replace it.” -Hawk Newsome, Chairman of Black Lives Matter of Greater New York.

This threat comes from the final lines of the communist manifesto. “They openly declare that their ends can be attained only by the forceable overthrow of all existing social conditions. Let the ruling classes tremble at a communistic revolution. The proletarians (people of color) have nothing to lose but their chains. They have a world to win.” The threat is very real and at the moment they think they have the momentum to accomplish their goals. After seeing all of the politicians and celebrities bow down to these Marxists I have to say, they are right. There is a very real chance that the reigns of this country could be handed over to a bunch of childish brats who are screaming and crying their way into power.

In St Louis Missouri a couple went into their house to grab their guns after a locked gate was smashed open and hundreds of protestors walked onto their property. For the Marxists the ownership of property is an insult to the proletarians (people of color). In section 2 of the communist manifesto there is a list of measures needed to be taken in order to create a communist nation. Number 1 states “Abolition of property in land and applications of all rents of land to public purposes.” To the protesters those people living behind that locked gate did not own their property.

The idea of inherited wealth is another insult to the communist manifesto. During these riots we saw the destruction and burning of black businesses. The opportunity to have inherited wealth was taken away by the same people to claim “black lives matter.” However, number 3 of the measures to take in the creation of a communist country states “Abolition of all right of inheritance.” The destruction of private property is not beyond the creation of a communist state, it is just one step closer to creating what they want.

There is an organized effort here with the abolition of police departments to make sure the only authority in the country is BLM. With the help of the media outlets and 24-hour news cycles most events are being twisted to fit a certain narrative. It isn’t uncommon to hear reporters say “peaceful protest” or “mostly peaceful protest.” Both statements being complete fabrications of the truth. These news outlets are primarily sided with the democratic party and leave it to Marx to guide BLM towards their media allies. “In France the communists ally themselves with the social-democrats, against the conservative and radical bourgeoisie, reserving, however, the right to take up a critical position in regards to phrases and illusions traditionally handed down from the great revolution.” When one party already has a political media infrastructure why wouldn’t you take advantage of it, and threaten them if they don’t play ball? The threat of being labeled a racist is the harshest punishment one can undergo these days, guaranteeing everything from a lose of job to social outcast. It doesn’t mean death, yet. BLM’s ability to execute a person found guilty of a social crime hasn’t happened yet, but it won’t take long at this rate.

What started out as the death of one man has led to the death of countless followers in the weeks that followed. While the protest promote Black Lives Matter there have been multiple shootings across the country that have caused the deaths of several black people. The first weekend after Minneapolis announced it was disbanding their police force, Chicago saw 43 shootings in one weekend, the following weekend (Father’s Day) had a record number 104 shooting with two children killed in the process. The Capital Hill Autonomous Zone (CHAZ) had five shootings with three black men killed during the two-week life span of that failed communist utopia.  Today 6-29-2020, there was a shooting in Kentucky where a BLM member was kicked out of a rally and came back to shoot into the protesters in retaliation.

Do I need to go on about how these are not peaceful protest? This is a communist revolution in the works. At the moment, the democrats are on their side. Some republicans are playing ball but I have to guess they have no idea what is going on or they haven’t taken their pills for dementia in a while. The media is still on their side although I have noticed they are not covering the protest anymore. The ongoing destruction is turning the tide away from Joe Biden, a mummified zombie who is ordered to do with they say if he gets into office. In any case, BLM has a higher approval rating than the president, congress, and the senate, allegedly. The movement is still going. Steps are being taken to further the cause. It won’t be long now before they claim their next victim and try to secure more land. This revolution is far from over.