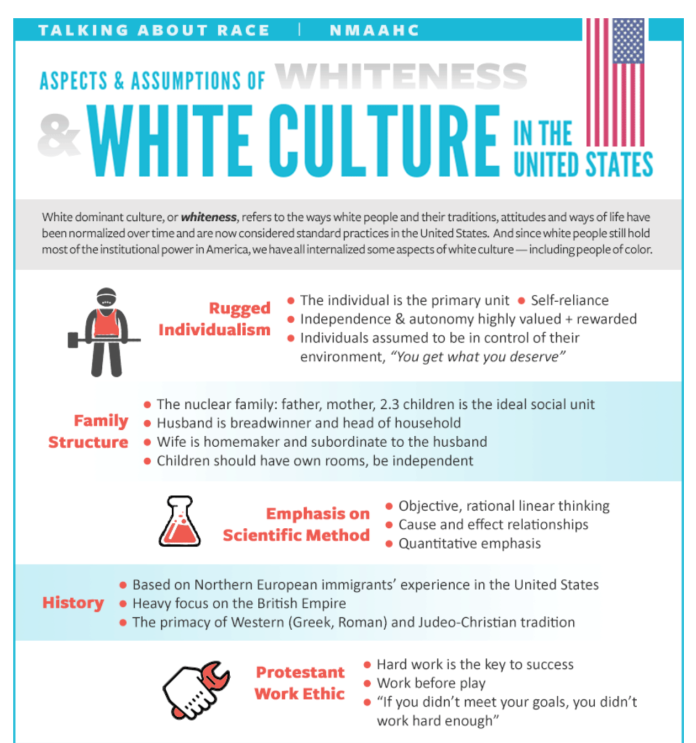 The National Museum of African American History and Culture compiled a list of everything that creates a great society, labeled it as white and said these are things we need to avoid. The first item on the list is rugged individualism. Self-reliance and being in control of your environment are not traits that people should strive for. I guess somebody should tell the Chinese special forces that, who are trained to survive on their own and live off the land. Now that I think of it every military teaches that. The people who live in Alaska have that life. Most third world countries have that life.

The nuclear family made the list. We should not be surprised this is on here since it is one of the things under attack from BLM. Having two parents that take care of their children is somehow frowned upon even though children raised in these environments are more likely to succeed in life, finish college, and have better relationships in their life. Who would want that for their kids?

The scientific method is white. George Washington Carver didn’t get the BLM memo. The ability to think rationally and come to truths using science is a white construct. I guess we should see what kind of jets, cell phones, and medical care BLM comes up with using magic.

History, in the sense that our country’s history is based on western Europe with an emphasis on British history. I would hope so, that is how the country was started. There was a trade that took place when we left the empire. We decided to think for ourselves and that included freeing slaves later.

The protestant work ethic, that philosophy that got us to where we are today, I guess that is something we need to get rid of. I took this to mean that the people who wrote this want something for nothing, but that isn’t possible because somebody has to put in the work to provide the things people need. Not to mention that Asians has a reputation for working harder than the people with the protestant work ethic.

Respect authority, I guess this list is something that we should toss out since it was written by people who think they are the authority on this topic.

Future orientation, planning for the future is a bad thing. If this one is confusing how about the concept of time being a western construct? Making a schedule is a bad thing. Knowing when to plant crops is a purely white concept. Meeting people for business or pleasure at a predetermined time is a bad thing. Wearing a watch is a white thing, I guess those rappers will have to hand off those diamond and gold watches off to the next white guy they see.

Aesthetics, I have no idea how they came up with this section. Meat and potatoes, bland is best. This was on the list and I have to say this what is considered poor food in most cultures. Plus, potatoes didn’t exist in Europe until north America was discovered so its not even traditional western European food, but nice try. A woman’s beauty is based on blonde and thin, according to who? This completely discredits the taste of the individual. Men’s attractiveness is based on economic status power and intellect. This is true for most cultures. TLC even wrote a song called No Scrubs that expresses their distaste for guys that can’t get a job.

The concept of protecting property is only white. Having a house, car, or money that was earned is a white concept. Who knew?

Competition should be eliminated and participation trophies handed out for people who show up, or not, maybe showing up is too competitive?

I’m going to skip to the final item on the list, be polite. Being rude must be the new normal these people are looking for. Its not one that I look forward to and something I don’t put up with. If you want to guarantee personal injury to yourself this is a good way to go about it. Try not being polite and see how far it gets you.

This document is a list of everything that makes a polite, functioning society where people can get along. What surprises me most about this is the fact that the organization of protest, using free speech a right available because of the Bill of Rights, and using technology like the internet (science bitch) uses all white concepts I would have to assume this makes the protest themselves a white construct. Congratulations, by the simple act of organizing a protest you participated in white Eurocentric culture.