The day started out in a hurry with my wife doing a tour of the Traverse city insane asylum that has been converted into a mall and office space. Some of the buildings are apartments and housing for the elderly but it has become well known for high class restaurants like Stella, fine wine such as Left Foot Charley, and hearty beer like Earthen Ales. It is easy to spend a day at what is now known as The Commons. While my wife was touring the site for two hours, I had an appointment at Landmark Books owned by a man named Paul. I had met Paul in Kalamazoo during a meeting with fellow typewriterholics. We are a strange bunch and when we start bragging about what he have found, seen, and almost bought, the conversation could be mistaken for a bunch of high school guys talking about the cute girls we almost scored with.

I have a Fox typewriter that I have been unable to fix on my own and Paul thought he might know a few tricks to get it running again. My suspicion led me to think that the spring for the carriage return is broken and that it would have to be completely torn apart to replace the one-hundred-year-old part. I met Paul at the store, chased my daughter around the brick walled tunnels of the building, and returned two hours later to see a look of frustration on Paul’s face. “I can’t fix it.” The beautiful machine, with its glowing black body and gold pinstripes would have to sit on a shelf, good enough to be admired but impotent to the touch. The thirty dollars I saved on not being able to fix it freed me to purchase a few other things I had set my eyes on.
Across from the counter was a shelf filled with books by Jim. Some had the paper marker stating that they were sign by the author and I took a look. A third print of Dalva was still in hardcover and looked brand new. To the left was a signed copy of The Woman Lit by Fireflies. Both were signed and both were added to my modest pile. 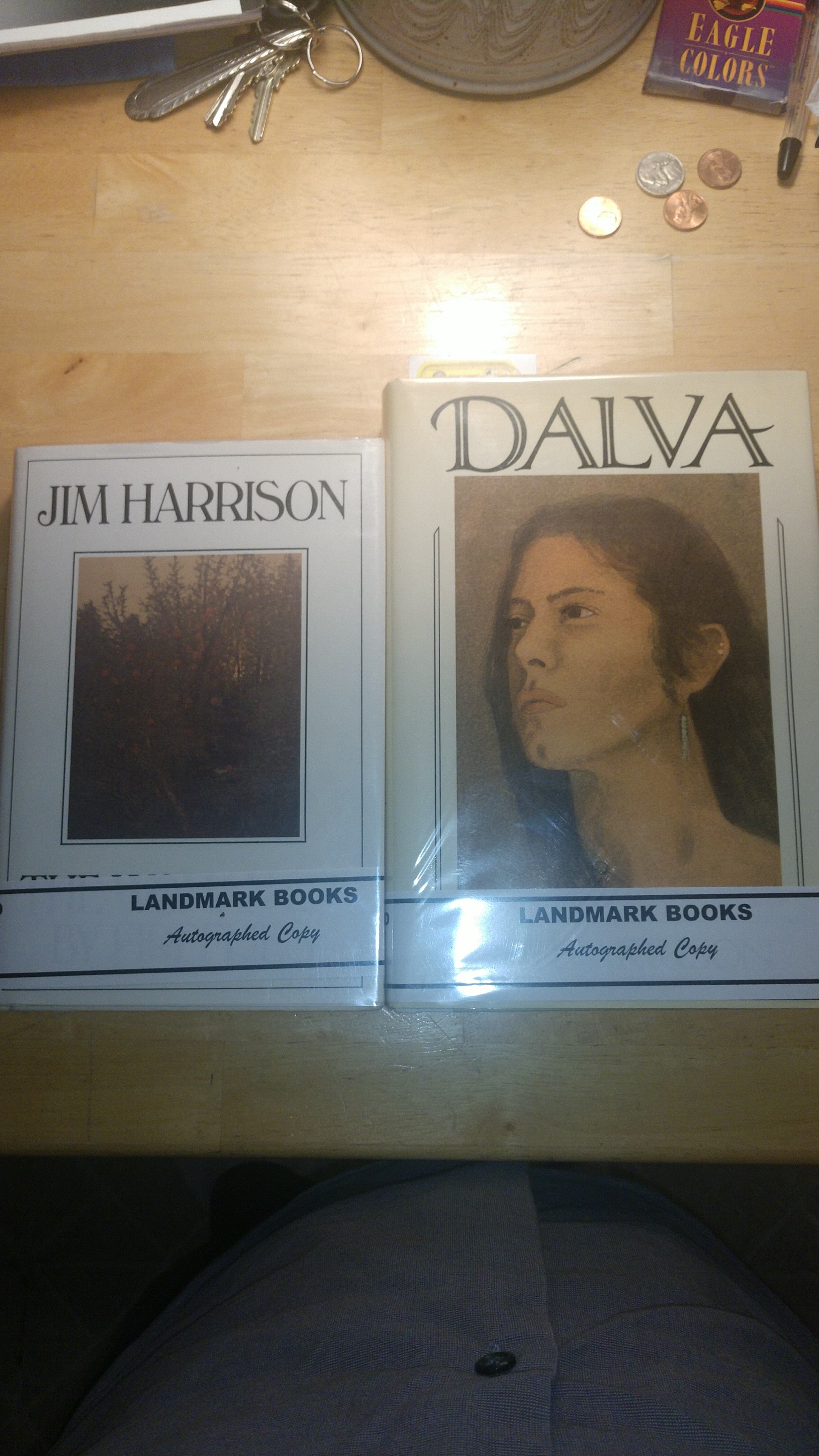 To the right-hand side of the store sat a glass case and while waiting for my wife to finish her tour I roamed around and found the case filled with proof editions of Dalva, Legends of the Fall, among first prints of other books. These had come from a collection owned by a retired CEO of some large company who settled down in the area. Not related but also bought from the same collection was a signed copy of Infinite Jest by David Foster Wallace. For an affordable sum of $2500 you can take it home today. I have a feeling that such a rare thing might stay in the case until some other collector with spare cash to burn comes along and sets it on his shelf to brag about and masturbate to in his private time.
I asked Paul if he had known Jim and to my surprise he said yes. I asked him what he was like? “Jim could be abrasive and short with you when he had been drinking, but that was all the time. When he wasn’t drinking…” He paused for a moment and thought about his next words. “he was fun to be around and pleasant but that was rare.” He sounded as disappointed as I felt. I had a feeling this would be the case for many that knew him. In an interview I found on YouTube Jim said that he had been asked why he was now putting out a book a year when that had been rare before. “When you stop drinking a gallon of vodka a day you are able to do a lot more.” I bought the autographed copies of Jim’s books along with a few other trinkets and left The Commons.
After the morning trip to the insane asylum, we went to Folgarelli’s, an Italian delicatessen that provides the area with cured meats and deli style sandwiches. Jim mentioned this place in his book The Raw and the Cooked. Before going out for a hunt he would stop in and buy a sandwich to go and eat it out in the field when he was hungry. There was also the selection of French wines that would have brought him in. The wine wasn’t enough to brag about, my own home town of Kalamazoo has several places to choose from with dozens of French reds to choose from. Maybe I’m being stuck up about this and a place like Folgarelli’s was the best that one could do in the area under the circumstances, however after being there I will say that if there is anything to brag about with this place it is the food at the deli. That didn’t stop me from buying a bottle of Cotes Du Rhone. 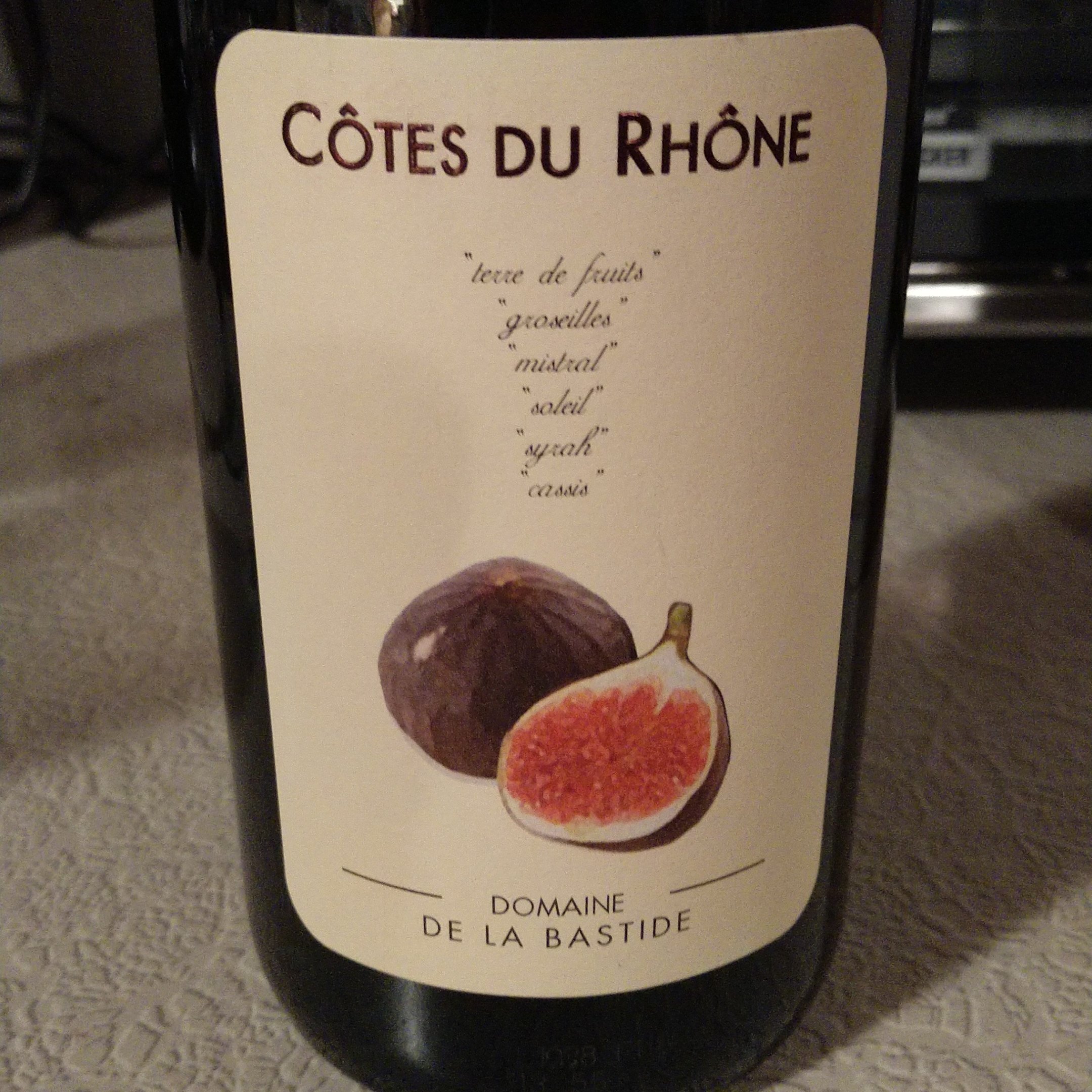 My wife picked out a sandwich from the long list on the wall and I search in vain for certain meats that would feed my appetite. I decided on The Godfather, a meaty sandwich with Italian dressing, red pepper spread, and prosciutto. There were a few other ingredients but they fail my memory at this time. The sandwich had a balance of flavor that you will never find at your local Subway or Arby’s. the bread was not too hard and not too soft. There was enough meat to keep you satisfied but not feel like a glutton. The red pepper was enough for a kick with the Italian dressing, of which I rarely like on anything. By the time I finished the sandwich I felt stuffed and would have to walk it off later. My daughter, who is two, and I feel like I must point this out with any story about her these days, proceeded to eat a small portion of a pasta salad and followed it up with tossing handfuls of it on the ground. A smackable sin in the house that I had grown up in. for me I see it fit to take away the meal that is not being appreciated and eating the remains in front of her. This of course did not work since she already proved that she didn’t care about the food to begin with. Either way, she didn’t have to finish it and I ended up leaving with a stretched stomach and a sense of self-loathing from eating too much so early in the day.
A few blocks over we found an antique store that was larger than it had appeared from the front. Three stories and filled with all kinds of eye-popping trinkets, we spotted everything from coins, dolls, wagons, pipes, and even, I’m not kidding here, an airplane. The pipes were a bunch of Dr. Grabows that are a dime a dozen but people seem to think otherwise. In a tiny room on the second floor I found what I didn’t know I was looking for, an Aztec portable typewriter. This was a steal at $50 and I picked it up and paid for it right away. We continued through the store and didn’t find anything else to go rushing to the counter for.

We tried to find a playground to take our daughter and while we did find one next to lake Michigan, we wanted something that was free from stuck up kids in uniforms who didn’t want to get dirty playing with a two-year-old. We left downtown and drove to Interlocken state park, not far from where our cabin is located. A few hundred yards past the main gate there was a beach with a playground and nobody else was around. Our daughter ran to the playground yelling “slide!” and climbing the stairs to make her first of many trips down the plastic amusement park ride. I walked the beach and found the water calm, with a small breeze and a blue sky framed by the trees along the shore.
I knew when my wife suggested coming here that it was a place that I could add to my list of Harrison stops. Over the years Jim would do lectures and talks on the campus here reading poetry and telling funny stories to student and staff. I can see why people would come here. It’s not lake Michigan and that alone is a big appeal. The park is isolated when compared to most. There are two lakes and a campus for marching bands and other musical studies to practice and perform. Writing lyrics like poetry is something that needs to be learned even if one starts to practice with a gift in the subject.
While relaxing in the park a school of ducks swam by and my daughter, being the pigheaded individual that she is, ran to the shore and scared the fatty delicious beasts away. Not satisfied with the short interaction she found acorns on the shore and tossed them into the water. When she ran out of acorns she went into the water and fetched the acorns she had already thrown. This continued until she was waist high in the water six feet out and still reaching for more. My wife and I stood on the shore trying to call her back out but of course, being Zoey, she went out until her legs floated to the surface and she was bobbing around in the water. In the few seconds that this happened I was amazed to see what was happening. She turned her head to the side and I watched her take a breath. Her arms moved to paddle and her legs kicked on after another. At no time did she panic, instead she was trying to swim. I kicked off one of my shoes and my wife slid her sandals off walking into the water and picking Zoey up as she bobbed around in perfect freestyle swimming fashion. Once Zoey was set on the shore she turned around and tried to walk back into the lake. This did not go over well. She apparently had no idea what had happened and that she could have drowned. The hundred yard walk back to the car was filled with screaming fits, tantrums, crying, earth shattering howls, and her standing her ground that she was not moving from until dad picked her up and carried her to the car dripping wet and covered in sand. I wondered if Jim’s daughters had ever done something like this, causing early gray hairs and a few more wrinkles in a matter of seconds. We left the park and went back to the cabin.
That night my wife and I sat around a camp fire. The cool night air was perfect for star gazing as a rabbit kept saying hello and small toads ran away from our feet as we came and went from the cabin with bottles of Cinnamon Girl from Left Foot Charley. Sarah told me about the tour of the hospital and we talked about where we would go tomorrow. It would be another day and there was still much to see. I wondered where Jim would take me next.